State visit to Japan: several agreements have been signed 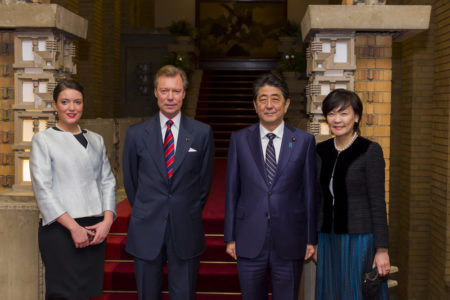 Late November, HRH the Grand Duke and the Princess Alexandra accompanied by Deputy Prime Minister and Minister of the Economy Etienne Schneider, Minister of Foreign and European Affairs Jean Asselborn, Minister of Finance Pierre Gramegna and an economic delegation of around one hundred business representatives conducted a state visit to Japan.

During four days, the economic and commercial relations were strengthened through the signature of new contracts and cooperation agreements between key players in both countries.

Once again, the space sector was a key focus of this state visit. A visit to the Tsukuba Space Center of the Japan Aerospace Exploration agency was organised as well as a conference dedicated to the opportunities and challenges of exploring and using space resources. Another event focused on the new frontiers of opportunities for satellite technologies.

The two countries signed a five-year memorandum of understanding concerning cooperation as well as the exploration and use of resources in outer space. Similar agreement have already been signed with Portugal and the United Arab Emirates.

The financial sector and, in particular, sustainable finance, was also in the spotlight of the visit. Two other memorandums were finalised: one between the Luxembourg House of Financial Technology and the Japan Fintech Association and the other one between the airline Cargolux and Nippon Cargo Airlines, allowing for the first time Cargolux to serve Narita Airport in Tokyo.