Luxembourg, US forge closer ties in space and defence cooperation

21-01-2020
Luxembourg Minster of Defence François Bausch met with Wilbur Ross, US Secretary of Commerce to discuss cooperation in the field of space, including the efficient and sustainable management of satellite traffic and space debris.  On 14 January 2020, Deputy Prime Minister, Minister of Defence, François Bausch and John Rood, US Under Secretary of Defence for Policy, met on a long-planned productive working visit. Together with Minister Delegate, Henri Kox, the various areas of bilateral collaboration were discussed, including the peaceful collaboration in space and cyber defence. Minister Bausch emphasised the importance of partners such as the United States regarding defence.

During this meeting, François Bausch signed the Terms of Reference for the Space Cooperation Working Group and a Memorandum of Understanding for Cooperation in Safety of Spaceflight and the Provision of Space Situational Awareness Services and Information.).

In this context, the Minister specified that space must remain peaceful and that “Situational Awareness” is a means of monitoring activities in this area. In addition, this capability allows for the monitoring of debris in space in order to avoid collisions with satellites. Henri Kox was interested in new areas and opportunities in space, including new generation meteorological satellites and sensors.

On 15 January 2020, several thematic meetings at the operational level at the Pentagon and the Senate dealt with cooperation regarding space and cybersecurity.

Firstly, François Bausch met with Wilbur Ross, US Secretary of Commerce. The discussions focused on current and future cooperation in the field of space, including the efficient and sustainable management of satellite traffic and space debris. 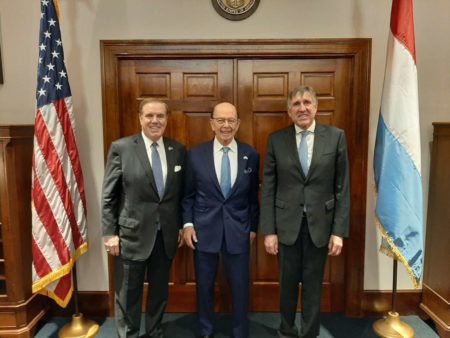 The Ministers were also briefed on the progress of the US in these two areas. With regard to cyber defence, the mutual recognition was that this area is gaining importance. “I believe that the conflicts of the future will be accompanied by cyber attacks. It is therefore essential to prepare ourselves, given our society’s dependence on these technologies,” said François Bausch.

A meeting with seven senators followed, focusing on bilateral political and economic relations and developments within the European Union. The senators did not fail to encourage Luxembourg’s security and defence efforts.

Subsequently, the Minister of Defence and the Minister Delegate of Defence laid a wreath at the Arlington National Cemetery in front of the Battle of the Bulge monument, in honour of the American soldiers who fell during this decisive battle of the Second World War, and witnessed the changing of the guard at the graves of unknown soldiers.

The Minister also met with officials from the Center for Climate Security, a US think tank that advises governments and international institutions on the security implications of climate change. In view of the relevant studies of this institution, it was agreed to explore possible avenues for future collaboration.