Luxembourg is second most productive economy 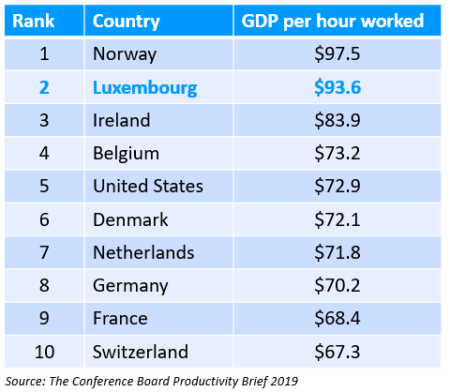 With a GDP per hour worked of $93.6, Luxembourg shows the second highest labour productivity among the world’s most mature economies in 2018. Norway tops the list, with Ireland, Belgium and the United States in places 3, 4 and 5.

These findings come from a study of the annual productivity growth rates for 123 countries produced by The Conference Board, a global business research organisation. According to the study, global productivity growth has remained weak in 2018 and will continue to be slow in 2019. “The widespread weakening in total factor productivity growth over the past decade, which was continued in 2018, is of great concern from a medium-term growth perspective,” said Klaas de Vries, Associate Economist at The Conference Board. “It means that the modest growth in labour productivity that still is being realised is mostly driven by the accumulation of physical capital, rather than efficiency gains or innovations. Given their strong human capital base and well-developed innovation economy system, mature economies including the US, Europe and Japan show some of the best prospects to turn investment into better productivity performance.”

The Conference Board Productivity Brief 2019