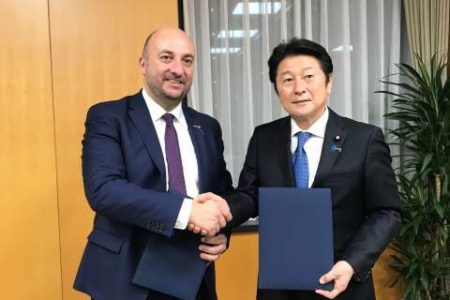 Luxembourg, November 29, 2017 – The Government of the Grand Duchy of Luxembourg, represented by the Deputy Prime Minister, Minister of the Economy, Étienne Schneider, and the Cabinet Office of Japan, represented by Masaji Matsuyama, Minister of State for Space Policy, signed today in Tokyo a memorandum of cooperation on exploration and commercial utilization of space resources.

Within its SpaceResources.lu initiative, Luxembourg offers commercial companies an attractive overall environment for space resource exploration and utilization related activities, including but not limited to a legal regime. The Grand Duchy is the first European country to offer a legal and regulatory framework addressing the capability of ownership of space resources and laying down the regulations for the authorization and the supervision of such missions in space.

After the agreements signed with Portugal and the United Arab Emirates, this is another important step forward in enhancing international cooperation. Our common approach and goals will surely open new collaboration opportunities. The agreement is a solid recognition of our SpaceResources.lu initiative, especially as Japan and more precisely JAXA have a strong experience in space missions and have been initiators of the renowned Hayabusa missions to collect samples from an asteroid and return them to Earth.

Read official press release from the Ministry of Economy