A joint team of researchers at the University of Luxembourg’s Interdisciplinary Centre for Security, Reliability and Trust (SnT) and SES, the world’s leading content connectivity provider, received early access to Luxembourg’s supercomputer MeluXina to carry out calculations for a research project.

The joint SES-SnT project, Resource allocation for satellite communications, includes modelling and optimising performance and radio spectrum usage for broadband satellite communications systems. As SES’s satellites deliver content and connectivity services to millions of users simultaneously, resources such as spectrum and transmission power need to be continuously allocated in the most optimal way to maximise the system performance.

We are grateful for the opportunity to use the capabilities of MeluXina to generate optimisation scenarios that will enable us to deliver the best service to our customers. 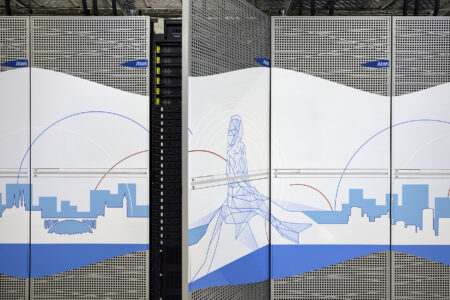 As SES starts operating its fully-digital satellites – SES-17 and O3b mPOWER, its second-generation medium earth orbit (MEO) constellation – the need for intelligent automation and optimisation of satellite systems has become increasingly important. SES and one of its industry partners have developed ground-breaking advancements for large-scale optimisation across its new satellites. The addition of the computational power of MeluXina and a research partnership with SnT brings testing and modelling of various scenarios to a different level.

“In order to optimise the performance of our innovative, next-generation satellites, we have to use software-based systems with complex algorithms, and run hundreds of tests before our new satellite systems are operational. We are grateful for the opportunity to use the capabilities of MeluXina to generate optimisation scenarios that will enable us to deliver the best service to our customers,” says Ruy Pinto, Chief Technology Officer of SES. “It was great to continue our partnership with SnT and further our research on space.”

The SnT-SES project was chosen among several national and international applications for Early Access to MeluXina, being recognised as one with the highest potential impact on society, science and the economy. While the project provides direct benefits for SES’ satellite communication, it is also highly relevant for SnT.

Working with SES gives our researchers the opportunity to work with cutting-edge industry solutions.

“There is always a trade-off between complexity and performance, and when your resources are satellites in orbit it is even more important to strike the right balance. Working with SES gives our researchers the opportunity to work with cutting-edge industry solutions, like their O3b mPOWER system, ensuring our innovative research is relevant for real-world applications,” says Professor Björn Ottersten, Director of SnT. “Meluxina’s computational power enabled the project team to scale up the complexity of their work, investigating optimisation scenarios that would not be realistic to consider with normal computers.”

“We are excited to see SES, a home-grown global content and connectivity satellite leader, and SnT, one of the leading research institutions in Luxembourg, joining efforts to benefit from LuxProvide’s supercomputing services,” says Roger Lampach, CEO of LuxProvide. “High system dimensions, such as for next-generation networks and satellite systems, require computationally intensive modelling, and that’s where MeluXina comes in. Computational speed, tailor made software tooling and the inhouse team expertise at LuxProvide merge together providing a unique boost to the SES and SnT research and development capabilities.”